The presence of pure night started covering the whole landscape and despite the low-dark lighting conditions inside the wagon, it eventually flowed into the long moving vehicle. Temperature wasn't ideally warm enough for sitting all night long and consequently, I folded out my sleeping bag and held myself firmly within the fabric.

Cartier-Bresson had one shot on a similar scene like this moment, although it probably wasn't one of his most famous captured moments to illustrate the so-called 'decisive moment,' especially after his established long career in photography before turning to painting. On that photo, a young couple were asleep on the train while sitting tightly next to each other, with the young man's arm protectively surrounding his partner. From the perspective within the image, you could imagine at that particular instant how Cartier-Bresson was holding his 50mm fixed focal lens and sitting opposite to this sleeping couple, quietly looking at them and almost instinctively, his body and mind were ready to engage before the right index finger triggered his camera's shutter button.

Whilst on the train, half-asleep and hesitant in thinking whether I should choose to take the perspective of the viewer or the subject in the scene. My half-sleeping mind seemed to be halted on the mid-point of the polarised role-identifying which position to take.

The couple from the artist's photo, who neutrally presented by themselves without considering their status 'recorded and reported' by others, were having a silent moment on a travelling period. The artist, on the other hand, was inspired and encouraged by his unknown travel mates.

They were all living in the pre-age of the digital nomad. And the distant time scale produced one precious thing which we might know partially less and less have today — the silent patience. 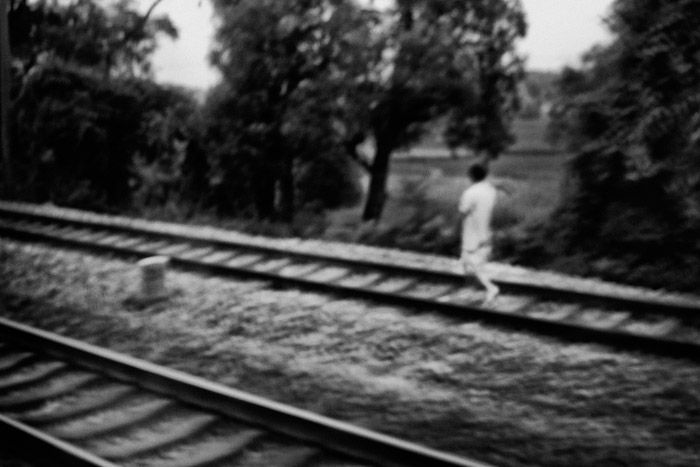 The liberty given by the digital age has disguised itself into a new face which we could call the post-liberty. As a normal global citizen in a contemporary society, anyone, but not everyone, can travel further than the couple in question and take a snapshot faster than the artists we admire and look though the whole 'magnum' bottle of the late 20th century. However, the combined rareness of being disconnected and the awareness of being connected function collaboratively and predominantly drive the individual. From the somewhat ‘can it be' to 'let it be' collective. The still motion stays unbalanced. The independence remains dependent.

As many art forms and movements have been voiced and even impacted in this tiny human history, is the analog-black-white-range-finder-photography fading out? Is Virtual Reality being questioned and practiced enough in the current world? Does Art need to be whispered or shouted into different codes of context to suit the heart of an audience? Or does the 'heart' also need to be tweaked and recomposed for our time? Yet, are we still content to see this discipline is still consistent in its privilege of being measured or involved with either scientific or artistic methods?

I wasn't trying to push that far to make the final decision. The imagery of being a lonesome world traveler has positioned an identically essential part deep in the 'heart' just like a nomad artist carrying humble passion and dreams on his duty of mobility. Is there any desire for debating this shifting identity? I wouldn't break this active silence. Over the night, my tired body and mind would be reset and ready for another day and Lyon would waiting the next morning.